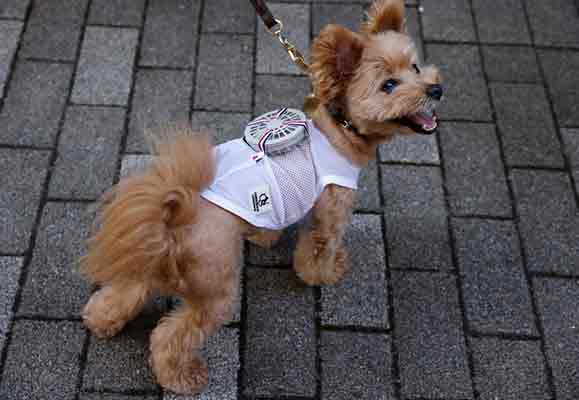 A Tokyo clothing maker has teamed up with veterinarians to create a wearable fan for pets, hoping to attract the anxious owners of dogs – or cats – that can’t shed their fur coats in Japan’s blistering summer weather. The device consists of a battery-operated, 80-gramme (3-ounce) fan that is attached to a mesh outfit and blows air around an animal’s body.

Rei Uzawa, president of maternity clothing maker Sweet Mommy, says she was motivated to create it after seeing her own pet chihuahua exhausted every time it was taken out for a walk in the scorching summer heat.

“There was almost no rainy season this year, so the hot days came early, and in that sense, I think we developed a product that is right for the market,” she said.

After the rainy season in Tokyo ended in late June, the Japanese capital suffered the longest heatwave on record with temperatures up to 35 degrees Celsius (95 Fahrenheit) for nine days. Soaring energy prices and the threat of power shortages during the recent heatwave had boosted expectations the government would restart some of the dozens of nuclear reactors idled after the 2011 Fukushima nuclear disaster.

“I usually use dry ice packs (to keep the dog cool). But I think it’s easier to walk my dog if we have this fan,” said Mami Kumamoto, 48, owner of a miniature poodle named Pudding and a terrier named Maco.

The device debuted in early July and Sweet Mommy has received around 100 orders for the product, Uzawa said. It comes in five different sizes and is priced at JPY 9,900 (roughly Rs. 5,900).

No Intention of Shutting Facebook Down, Kenyan Ministers Say After Watchdog’s Ultimatum Over Hate Speech 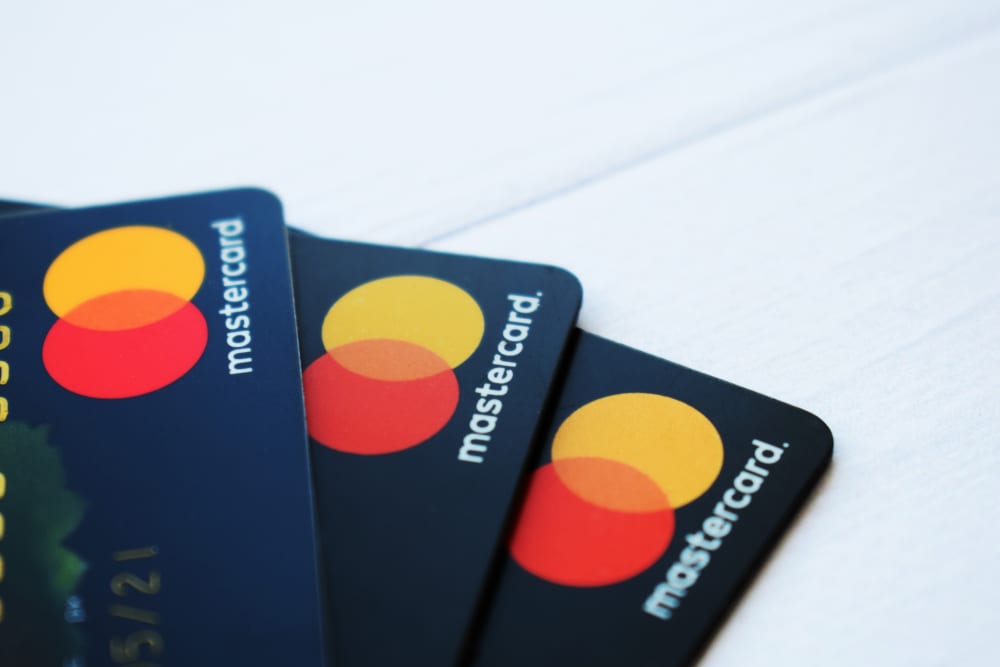 Government think tank NITI Aayog has made a case and offered a template and roadmap for a licensing and regulatory regime for digital banks that focuses on avoiding any regulatory or policy arbitrage and offers a level playing field to incumbents as well as competitors. In a report titled ‘Digital Banks – A Proposal for Licensing and Regulatory Regime for India’, the think tank recommended the issuance of a restricted digital bank license to such financial entities. It mooted for a ‘full-scale’ digital bank license.

The methodology for the licensing and regulatory template offered by the report is based on four factors such as entry barriers, competition, business restrictions, and technological neutrality.

Taking forward the agenda of fintech innovations, and marking 75 years of India’s independence, the government in its Budget for 2022-23 proposed to set up 75 digital banking units in 75 districts of the country by scheduled commercial banks.

The report also maps prevalent business models in this domain. It highlights the challenges presented by the ‘partnership model’ of neo-banking–which has emerged in India due to a regulatory vacuum and in the absence of a digital bank license.

Given the need for leveraging technology effectively to cater to the needs of banking in India, this report studies the prevailing gaps, the niches that remain underserved, and the global regulatory best practices in licensing digital banks, said CEO Parameswaran Iyer while releasing the report.

In recent years, India has made rapid strides in furthering financial inclusion catalyzed by the Pradhan Mantri Jan Dhan Yojana for the unversed. However, credit penetration remains a policy challenge, especially for the nation’s MSMEs that contribute 30 percent to GDP, 45 percent to manufacturing output, and 40 percent to exports, while creating employment for a significant section of the population.

Financial inclusion has only been furthered by the Unified Payments Interface (UPI), which has witnessed extraordinary adoption. UPI recorded over 4.2 billion transactions worth Rs 7.7 trillion in October 2021.

The NITI Aayog report has been prepared based on inter-ministerial consultations. Last year, NITI Aayog released a discussion paper on the subject for wider stakeholder consultations. Comments received from 24 organizations were examined and suitably addressed in the final report. 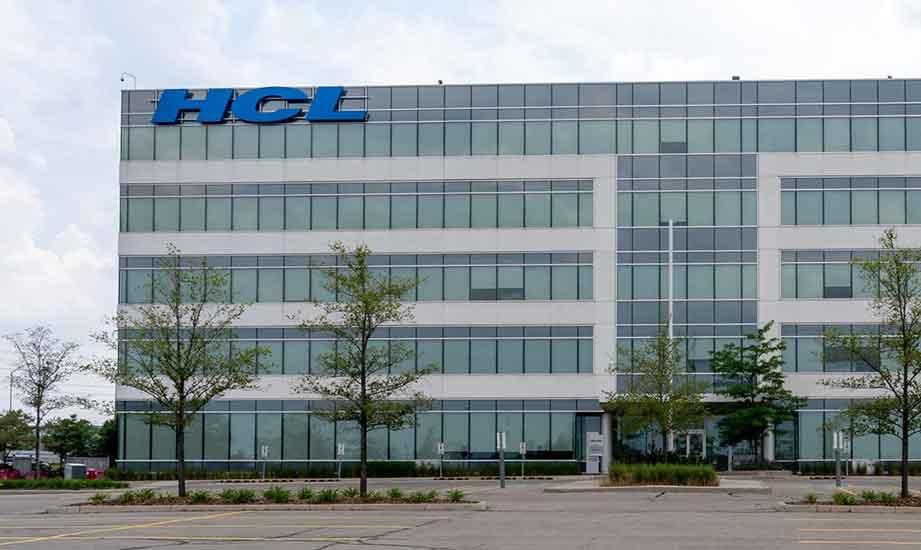 India’s startup story is “intact” and its tech innovation fundamentals remain vibrant and relevant despite fluctuating valuations in the startup space, according to HCL Technologies Chief Executive Officer C Vijayakumar. The comment by the Indian IT major HCL Technologies’ top official comes at a time when investments and venture capital deal volumes in the startup space have started to taper, as investors turn wary of committing large cheques amid uncertain market conditions.

Asked about startup valuations coming off their peak, and whether the space is headed for a possible reset, HCL Tech’s Vijayakumar in an interview with PTI said: “I absolutely believe that the India startup story, tech innovation, products, all of that coming out of India, is very intact”.

“Obviously there is some kind of reduction in valuations … but barring that, the big picture is very vibrant and relevant for a lot of new things that are happening in the market. So, I am very positive on that,” Vijayakumar added.

After a dream run and heady valuations in past years, the wave of venture capital chasing the Indian startup ecosystem (the third largest startup ecosystem in the world) appears to be dwindling. Spooked by concerns over profitability, cash burn, and corporate governance issues, investors are raising their guard, while stock market corrections have taken the sheen off newly-listed startups.

The funding seems to have come off the previous high, witnessed in Q3 2021, the Tracxn report said, while indicating a “major consensus amongst market players of a ‘winter of funding’ or a downturn in investors’ confidence and sentiments towards funding startups”.

On whether HCL Tech would look at the startup space for acquisition, given the valuations have turned attractive, Vijayakumar said, “it all depends … we’re constantly looking for capability-led acquisitions, in the services and products side. If we find something interesting, we may look at it.” HCL Technologies recently reported a 2.4 per cent year-on-year rise in its consolidated net profit for the three months ended in June 2022 at Rs 3,283 crore. The revenue of the Noida-headquartered firm stood at Rs 23,464 crore, nearly 17 per cent higher than the year-ago period.

The company retained its FY23 revenue outlook in the 12-14 per cent band, citing “strong momentum in the market” and said it is positive about growth trajectory. The company expects to be on the lower end of the guided EBIT (earnings before interest and taxes) margin band of 18-20 per cent.

Vijayakumar asserted that the company is “on a good upcycle”, and will use multiple levers to mitigate the challenges around margins. On whether there is any impact of the Russia-Ukraine war on operations, Vijayakumar said that the company does not have any presence in these locations, for sales or delivery.

“We have presence in some adjacent countries, such as Romania, Poland … so in those countries there is no problem, things are going fine. We didn’t have any direct exposure to Russia or Ukraine,” he said.

As far as Europe is concerned, the company has not seen any material changes in the overall pipeline or demand, and “it continues to be quite robust”. To a question on the timelines by when the company plans to get its workforce back to office, Vijayakumar said HCL Tech pursues a ‘virtual-first hybrid operating model’.

“So wherever the work can be done virtually, we tell people to continue doing it virtually. We are putting together an engagement model, where we expect them to be in one of our locations, maybe a couple of days in a month, or in some cases, a couple of weeks,” he said.

That model is evolving right now. “Maybe about 20 percent of our employee base is working from our locations, and that number varies from location to location. We think it will only marginally increase, not dramatically increase,” he said but did not divulge a target ratio or timeline for achieving the same. 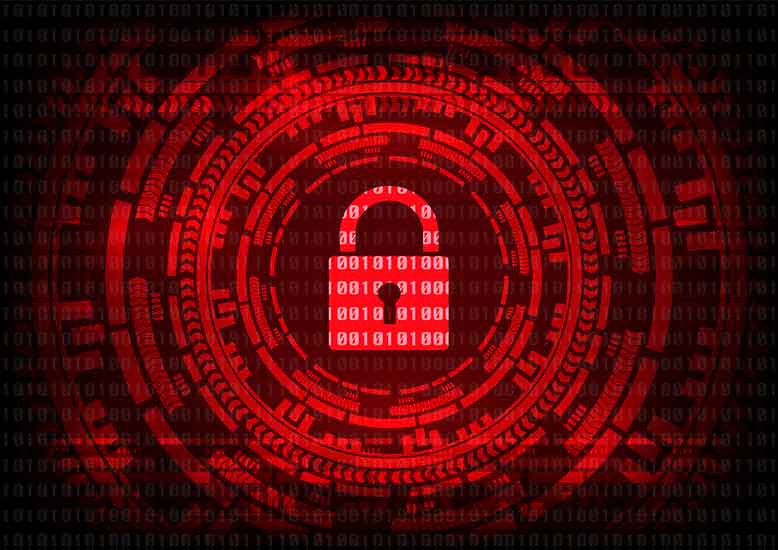 An Indian Institute of Science team has developed a “record-breaking” true random number generator (TRNG), which can improve data encryption and provide improved security for sensitive digital data such as credit card details, passwords and other personal information. The study describing this device has been published in the journal ‘ACS Nano’, the Bengaluru-based IISc, said in a press release on Friday.

“Almost everything we do on the internet is encrypted for security. The strength of this encryption depends on the quality of random number generation,” says Nithin Abraham, a PhD student at the Department of Electrical Communication Engineering (ECE), IISc.

Abraham is a part of the IISc team led by Kausik Majumdar, associate professor at ECE.

Encrypted information can be decoded only by authorised users who have access to a cryptographic “key”. But the key needs to be unpredictable and, therefore, randomly generated to resist hacking.

Cryptographic keys are typically generated in computers using pseudo-random number generators (PRNGs), which rely on mathematical formulae or pre-programmed tables to produce numbers that appear random but are not.

It consists of an artificial electron trap constructed by stacking atomically-thin layers of materials like black phosphorus and graphene. The current measured from the device increases when an electron is trapped, and decreases when it is released. Since electrons move in and out of the trap in a random manner, the measured current also changes randomly. The timing of this change determines the generated random number, the statement said.

“You cannot predict exactly at what time the electron is going to enter the trap. So, there is an inherent randomness that is embedded in this process,” explains Majumdar.

The performance of the device on the standard tests for cryptographic applications designed by the US National Institute of Standards and Technology (NIST) has exceeded Majumdar’s own expectations.

“When the idea first struck me, I knew it would be a good random number generator, but I didn’t expect it to have a record-high min-entropy,” he says.

Min-entropy is a parameter used to measure the performance of TRNGs. Its value ranges from zero (completely predictable) to one (completely random). The device from Majumdar’s lab showed a record-high min-entropy of 0.98, a significant improvement over previously reported values, which were around 0.89.

“Ours is by far the highest reported min-entropy among TRNGs,” says Abraham. The team’s electronic TRNG is also more compact than its clunkier counterparts that are based on optical phenomena.

“Since our device is purely electronic, millions of such devices can be created on a single chip,” adds Majumdar.

He and his group plan to improve the device by making it faster and developing a new fabrication process that would enable the mass production of these chips.