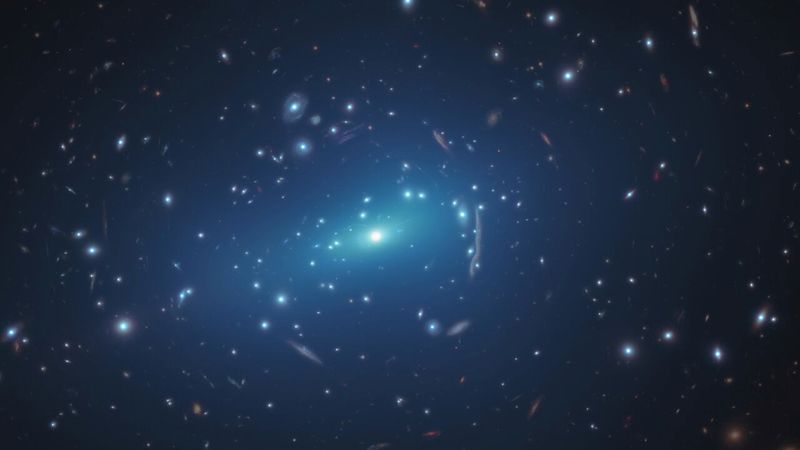 Dark matter, mysterious invisible stuff that makes up most of the mass of galaxies including our own Milky Way, is confounding scientists again, with new observations of distant galaxies conflicting with the current understanding of its nature.

Research published this week revealed an unexpected discrepancy between observations of dark matter concentrations in three massive clusters of galaxies encompassing trillions of stars and theoretical computer simulations of how dark matter should be distributed.

“Either there is a missing ingredient in the simulations or we have made a fundamental incorrect assumption about the nature of dark matter,” Yale University astrophysicist Priyamvada Natarajan, a co-author of the study published in the journal Science, said on Friday.

Dark matter is the invisible glue that holds stars together inside a galaxy. It also creates an invisible scaffold that enables galaxies to form clusters. But it has very peculiar properties. It does not emit, absorb or reflect light and does not interact with any known particles.

The bulk of the matter in the universe, about 96 percent, is thought to be dark matter, with ordinary matter – the visible stuff that makes up stars, planets and people – a mere 4 percent.

Dark matter’s presence is known only through its gravitational pull on visible matter in space. It differs from the similarly enigmatic and unseen dark energy, which is considered a property of space and is driving the universe’s accelerated expansion. Dark energy is repulsive. Dark matter attracts through gravity.

The new study involved observations from the Hubble Space Telescope and the European Southern Observatory’s Very Large Telescope in Chile.

When the light from distant sources like faraway galaxies travels through matter such as another galaxy or a cluster of them, the light is deflected and bends – a phenomenon called “gravitational lensing,” said astrophysicist and study lead author Massimo Meneghetti of the Observatory of Astrophysics and Space Science in Bologna and National Institute for Astrophysics in Italy.

“This is quite surprising,” Meneghetti said.

TikTok Sale: China Said to Rather See US Operations Close Than a Forced Sale

Chinese Spacecraft in Race With US and UAE Set for Mars Landing in May: Report

A Chinese spacecraft is expected to land on Mars in May, state-run media reported on Thursday, citing a space agency official.

The spacecraft, which left Earth in July, is set to land in Utopia Planitia, a plain in the northern hemisphere of Mars, the China News Service reported, citing Liu Tongjie, spokesman for the Mars mission.

Separate spacecraft launched by the United States and the United Arab Emirates this year are also en route to Mars, though only the US one will attempt a landing.

In 2003, China became the third country to put a man in space with its own rocket after the former Soviet Union and the United States.

China has made space exploration a top priority in recent years as it tries to become a major space power by 2030. 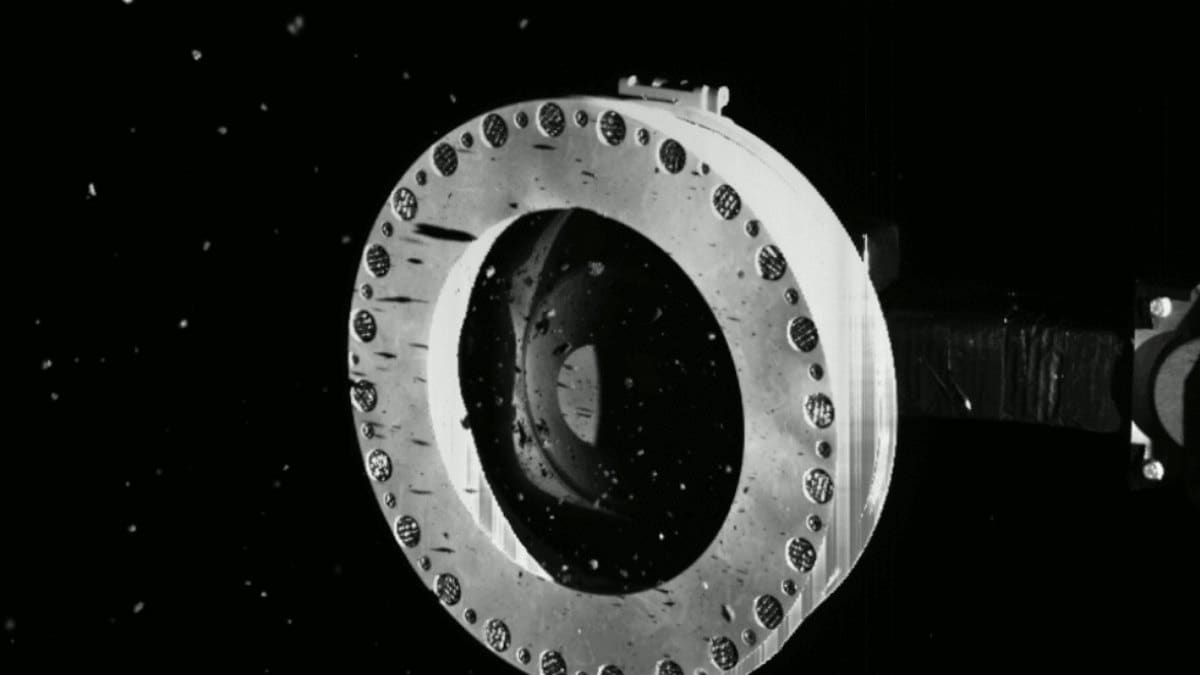 NASA’s robotic spacecraft Osiris-Rex is set to begin on Tuesday a delicate operation to store the precious particles it scooped up from the asteroid Bennu, but which were leaking into space when a flap got wedged open.

The probe is on a mission to collect fragments that scientists hope will help unravel the origins of our solar system, but that hit a snag after it picked up too big of a sample.

Fragments from the asteroid’s surface are in a collector at the end of the probe’s three-metre (10-foot) arm, slowly escaping into space because some rocks have prevented the compartment closing completely.

That arm is what came into contact with Bennu for a few seconds last Tuesday in the culmination of a mission launched from Earth some four years ago.

The probe is thought to have collected some 400 grams (14 ounces) of fragments, far more than the minimum of 60 grams needed, NASA said previously.

Scientists need to stow the sample in a capsule that is at the probe’s centre, and the operation was moved up to Tuesday from the planned November 2 date due to the leak.

“The abundance of material we collected from Bennu made it possible to expedite our decision to stow,” said Dante Lauretta, project chief.

OSIRIS-REx is set to come home in September 2023, hopefully with the largest sample returned from space since the Apollo era.

The stowing operation will take several days, NASA said, because it requires the team’s oversight and input unlike some of OSIRIS-REx’s other operations that run autonomously.

After each step in the process the spacecraft will send information and images back to Earth so scientists can make sure everything is proceeding correctly.

The probe is so far away that it takes 18.5 minutes for its transmissions to reach Earth, and any signal from the control room requires the same amount of time to reach OSIRIS-REx. 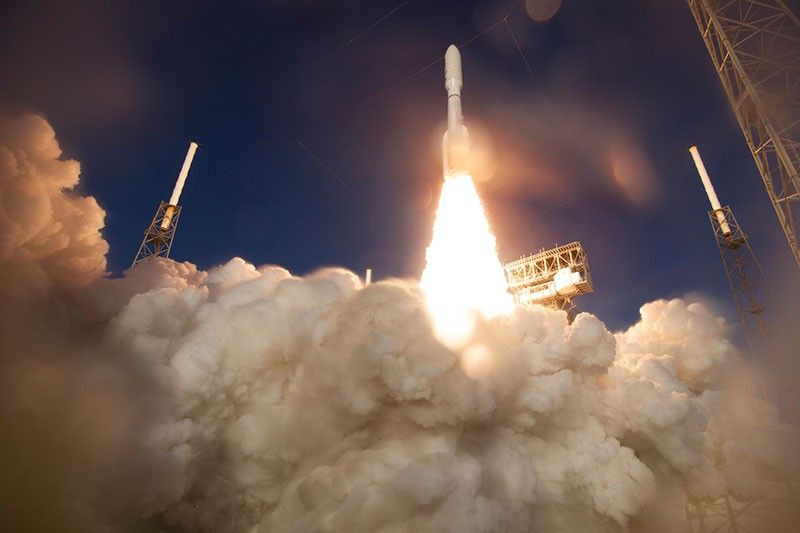 A Russian Soyuz spacecraft carrying a US astronaut and two Russian cosmonauts blasted off from the Baikonur cosmodrome in Kazakhstan on Wednesday and successfully reached orbit, live footage broadcast by Russia’s space agency Roscosmos showed.

The crew members travelling to the International Space Station (ISS) are Kate Rubins, a NASA microbiologist who in 2016 became the first person to sequence DNA in space, and Russian cosmonauts Sergey Ryzhikov and Sergey Kud-Sverchkov.

The mission is the last scheduled Russian flight carrying a US crew member.

Since the space shuttle programme ended in 2011, NASA has relied on Russia to ferry its astronauts to the space station, an orbiting laboratory 250 miles above Earth that has housed international crews of astronauts continuously for nearly 20 years.

The US space agency in 2014 contracted Elon Musk’s SpaceX and Boeing to build competing space capsules in an effort to reclaim NASA’s launch independence.

The $8 billion (roughly Rs. 58,620 crores) programme enabled SpaceX’s first manned trip to the space station in May, marking the first from home soil in nearly a decade.

NASA has purchased additional crew seats from Russia as its public-private crew programme faced delays, with Rubins’ mission being the most recent.

The US is scheduled to begin operational missions on SpaceX’s Crew Dragon capsule.

“We have an incredible partnership,” Rubins said in an interview from Russia’s Star City before her flight. “We’ll continue to train crews over here and we’re going to have cosmonauts come to the Johnson Space Center and train.”

NASA and Roscosmos have committed to continue the flight-sharing partnership and are in talks to fly Russian astronauts on US vehicles and to fly US astronauts on Russian rockets when needed, a spokesperson for Roscosmos told Reuters.

“Of course, mutual flights are of interest for ISS reliability and continuous operations,” the spokesperson said. “This approach (mixed crew flights) will ensure delivery of the crew to the station, should a problem with the partner spacecraft occur.” 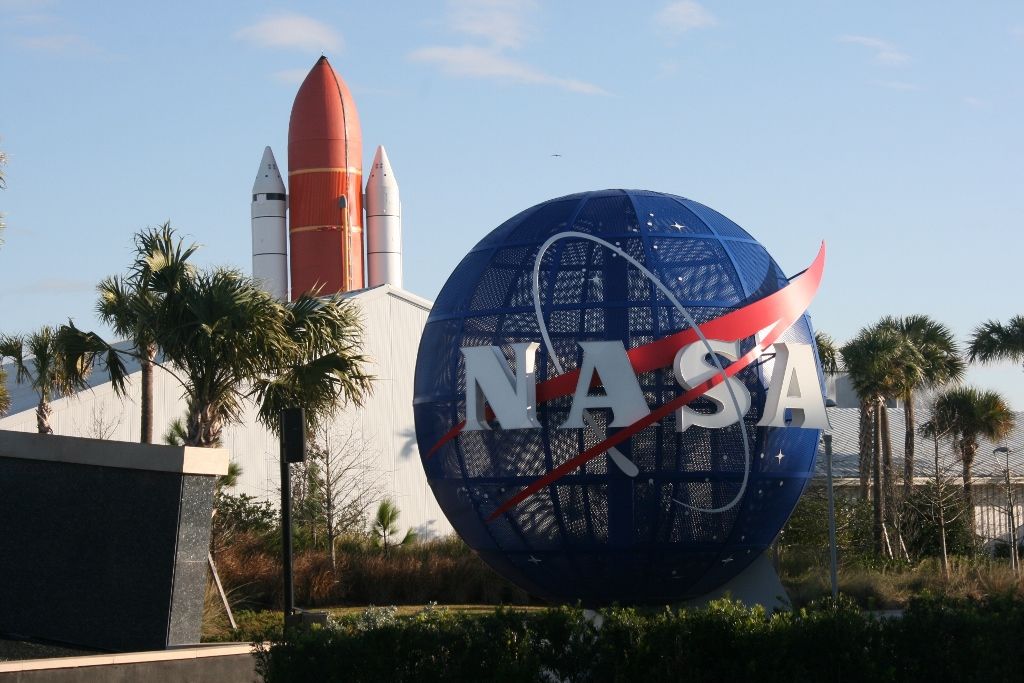 NASA announced on Tuesday that eight countries have signed an international agreement called the Artemis Accords that outlines the principles of future exploration of the Moon and beyond.

The treaty paves the way for its founding members, Australia, Canada, Italy, Japan, Luxembourg, United Arab Emirates, Britain and the United States, to participate in NASA’s Artemis programme, which aims to return humans to Earth’s nearest neighbour by 2024.

“Artemis will be the broadest and most diverse international human space exploration programme in history, and the Artemis Accords are the vehicle that will establish this singular global coalition,” said NASA Administrator Jim Bridenstine.

BREAKING: Today, we are announcing that 8 countries have signed the #Artemis Accords! The Artemis program will be the broadest and most diverse international space exploration coalition in history. And we’re just getting started. #IAC2020 More: https://t.co/8WzV1BfJy3 pic.twitter.com/ZNo90qf3on

“With today’s signing, we are uniting with our partners to explore the Moon and are establishing vital principles that will create a safe, peaceful, and prosperous future in space for all of humanity to enjoy.”

While NASA is leading the Artemis programme, it has emphasised the need for international partnerships in building up a sustainable presence on the Moon, something the agency views as key ahead of an eventual human mission to Mars.

The agency hopes, for example, to excavate ice from the Moon’s south pole to supply both drinking water and to split the molecules apart to make rocket fuel for the onward journey.

NASA said the Artemis Accords reinforce and implement the 1967 Outer Space Treaty, and are split broadly into 10 principles.

The signatories commit, for example, to adhering to peaceful exploration in a transparent manner, to create hardware systems that are operable by every member nation, and to registering their space objects.

Other principles include affirming that they will render assistance to each other in case of emergency, make their scientific data public, preserve the heritage of outer space and plan for the safe disposal of space debris.

The announcement came a day after Dmitry Rogozin, the head of the Russian space agency Roscosmos, said Moscow was unlikely to participate in the Gateway space station, marking the probable end of the type of close cooperation seen for two decades on the International Space Station (ISS).

China has an active lunar program with its own international collaborations.

Last month, a Chinese-German team published daily radiation measurements on the lunar surface recorded by the Chang’E 4 lander in 2019.

They concluded that the level of radiation limited astronauts to two or three months on the Moon, vital information that the US Apollo missions of the 1960s and 1970s had not gathered. 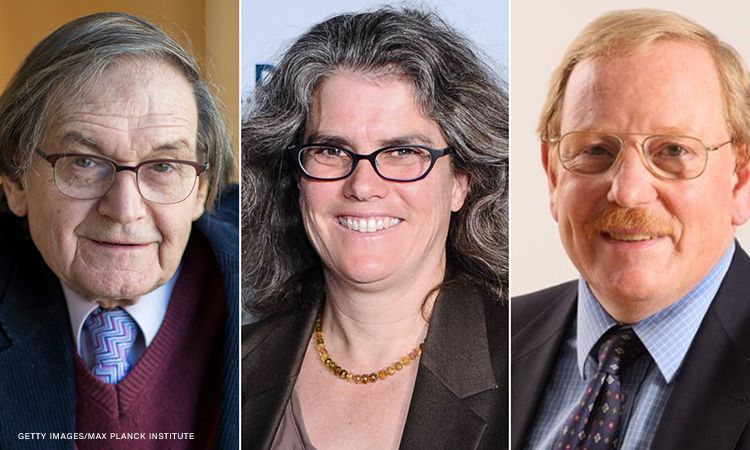 Britain’s Roger Penrose, Reinhard Genzel of Germany and U.S. scientist Andrea Ghez won the 2020 Nobel Prize for Physics for their discoveries about one of the most exotic phenomena in the universe, the black hole, the award-giving body said on Tuesday.

Penrose, professor at the University of Oxford, won half the prize for his work using mathematics to prove that black holes are a direct consequence of the general theory of relativity.

Physics is the second of this year’s crop of Nobels to be awarded, after three scientists won the medicine prize for their discovery of Hepatitis C on Monday.

Among the Nobel prizes, physics has often dominated the spotlight with past awards going to scientific superstars such as Albert Einstein for fundamental discoveries about the make-up of the universe, including the general theory of relativity.

“The discoveries of this year’s Laureates have broken new ground in the study of compact and supermassive objects,” David Haviland, chair of the Nobel Committee for Physics, said on awarding the SEK 10 million (roughly Rs. 8 crores) prize.

“But these exotic objects still pose many questions that beg for answers and motivate future research.”

Ghez is only the fourth woman to win the physics prize, after Marie Curie in 1903, Maria Goeppert Mayer in 1963 and Donna Strickland in 2018.

The Nobel prizes were created in the will of Swedish dynamite inventor and businessman Alfred Nobel and have been awarded since 1901.

This year’s awards occur under the long shadow of the COVID-19 pandemic that has curtailed much of the usual festivities surrounding the prizes and sent the scientific world racing to develop a vaccine and treatment. 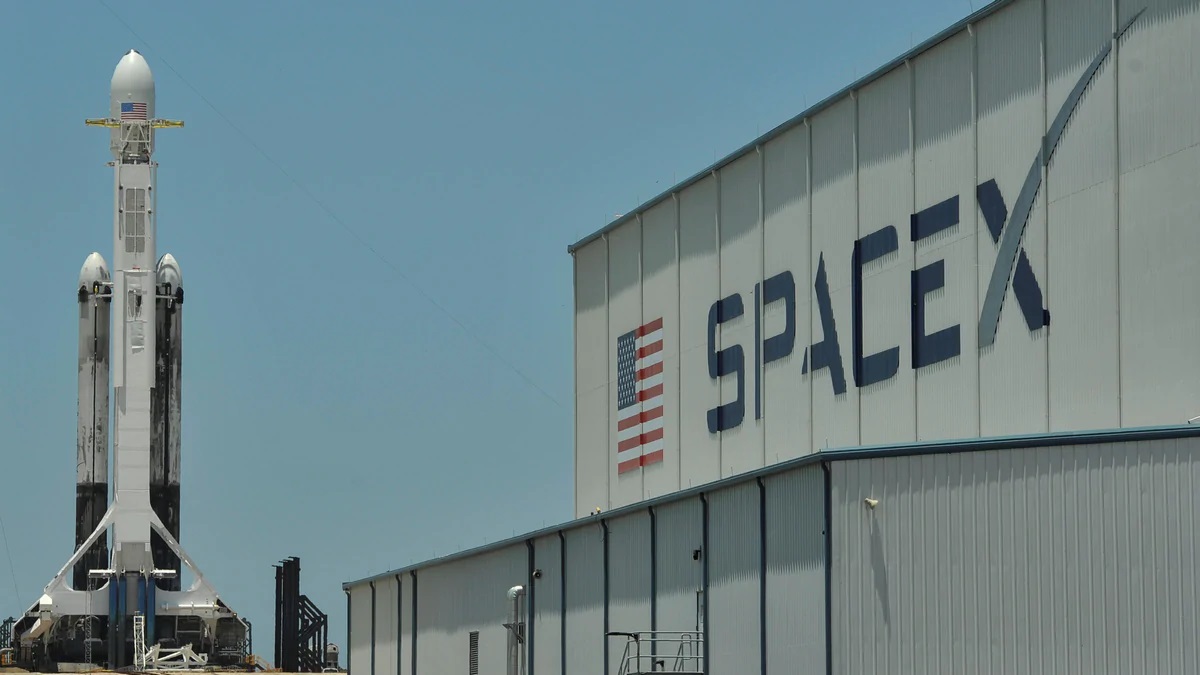 SpaceX, known for its reusable rockets and astronaut capsules, is ramping up satellite production for Starlink, a growing constellation of hundreds of Internet-beaming satellites that chief executive Elon Musk hopes will generate enough revenue to help fund SpaceX’s interplanetary goals.

Under the SDA contract, SpaceX will use its Starlink assembly plant in Redmond, Washington, to build four satellites fitted with a wide-angle infrared missile-tracking sensor supplied by a subcontractor, an SDA official said.

The awards are part of the SDA’s first phase to procure satellites to detect and track missiles like intercontinental ballistic missiles (ICBMs), which can travel long distances and are challenging to track and intercept.